FREEDOM is a SINE QUA NON for ART
Bratislava is a city of great possibilities. It is astonishing in its openness to the ‘new’. It is not a finished, conserved space. Its strength lies in its spontaneity and diversity, its resistance of definition and its own brand of youthfulness. We conceive the idea of a campus in the same spirit – as a lively, pluralist, youthful and open space. For this purpose
we are creating the structure of REGULATED FREEDOM. We are doing this with the aid of a RASTER, a fixed regulation organising the entire space of the campus. We can find a raster within the structure of the original building, but restricted to a single function – communication, thus it brings nothing more, and does not provide a space for informal meeting, for functions outside of the official programme, functions which transgress the boundaries of rationality.

In our project, the raster becomes the essence of the entire campus, enabling a full integration of all its functions. Integration without hierarchy, integration open to diversity and to the future. Our project is an open project. We understand the raster as a rule (regulation), and only afterwards as a physical element. The raster does not enforce anything, it merely connects. It becomes the framework for freedom.
The designed buildings are based on the composition of the raster.
They respond to the existing building. Both to its original part, characterised by the austere rationalism of late modernism, and to the superstructure, which attempts to please the eye, but which we regard as a form of pollution. The project develops the concept of the “cluster” development of the original building. It also responds to the “pollution” of the concept of the later superstructure. It does not reject either the first (cluster) or the second (“pollution”), but alters the proportions between them, the proportions between rigidity and spontaneity. Such an approach enables free designing of the content of the raster (the use of different typologies, a diversity of relationships between the individual fragments etc.).

PUBLIC SPACE – A NEW PARK FOR ALL
The surrounding buildings are characterised by their great neglect of public space. An example of such neglect is the area in front of the building of the Slovak National Archive – a space which is “cut off” and “impounded”. We also regard the surroundings of the academy as problematic. This area has not been “impounded”, but has been severely
neglected. Because we see similar problems on the scale of the entire city, we consider it an obligation of all public institutions to take their share of the responsibility for the public space of the city. Our project responds to this challenge. In our project, public space is opened up not only to the needs of the school (its students and employees), but also to the requirements of the city‘s population. We will not fence off the school complex. We propose a NEW PARK around and beneath the building. A park which is accessible on a number of levels, the majority of which are nevertheless open to all. A park which is an interconnection of the school and the city.
An example of such a linkage may be the outside gallery / raster, which becomes a landscape element in the part of the terrain. It is not an enclosed structure. Due to the fact that it is not possible to assess whether this element is acceptable from the perspective of the Urban Plan without breaching anonymity, the gallery is not a part of our design, but rather an outlook
for potential future development. The planting of greenery in the terrain shall complement and enhance the effect of Holý vrch in the city panorama.

The TECHNOLOGICAL PAVILION, in addition to the prescribed programme, is extended by a new
main entrance to the building, dining hall and FOYER, located on the 1st floor. The foyer is a large, open space which is formed by a permeation of the raster and the surfaces it contains, all in the form of a new spatial plan. Its situation on the 1st floor not only frees up the ground floor for functions requiring direct access from the level of the terrain (supplies), but also opens a space for superb views in a number of directions, and at the same time – and this is the most important – locates the foyer at the centre of the building. The foyer, together with the dining hall, presentation and teaching centre, in the second phase with the great hall and subsequently in future also with the outside gallery, will form the heart of the campus.
The HALLS OF RESIDENCE, located in the rear (northern) part of the complex, are divided into two,
or more precisely speaking three buildings: The larger is composed of two buildings interconnected with a segment of the raster which contains a common area with a kitchen/dining room, supplementing the residential function. On the ground floor is the entrance, including reception (serving all the buildings of the halls of residence), on the upper floor the buildings are connected by a recreational area with a view of the Kamzik transmission tower.
The smaller building comprises only one block of rooms, and is supplemented by a common area
of a kitchen/dining room, again located within the raster. The entire residential complex is linked by a raster on the level of the 1st floor, which interconnects it with the remaining part of the campus. The buildings facing north west leave a sufficient view from the attics of the existing building, and at the same time allow sufficient sunlight into the rooms of the proposed facility.

GREAT HALL
In the second phase, the eastern part of the campus will be closed off by the great hall, accessible from the main foyer in the technological pavilion. The great hall, surrounded by a raster, will incorporate 620 places and in case of need can be extended by a part of the raster, and thus increase its capacity to the required number of 800 seats. The communal facilities of the great hall are a part of the foyer.
DEPARTMENTS – LEFT WING
In the second phase, the existing building is extended also in a second, western direction. This part houses the Department of Art Theory and History, the Department of Architecture and the Department of Painting. Remaining part of second phase: library, rectory etc. are located above the technological pavilion. A large drawback of the common areas of the existing building is their failure to utilise the potential of the location (these areas seem to show no interest in their surroundings/context). Our project attempts to rectify this situation and open up to the surroundings (park, Danube, Konigswarte, Kamzik etc.)

MATERIAL DESIGN
The proposed building is intended merely as a background for all that may take place inside. The interior spaces are not striking in their material, form or design, but should rather be almost invisible, not competing with the life of the school. Material design: white concrete, glass, galvanised sheet metal, freeing up space for free use.

Architectural competition for the design of Art campus in Bratislava. 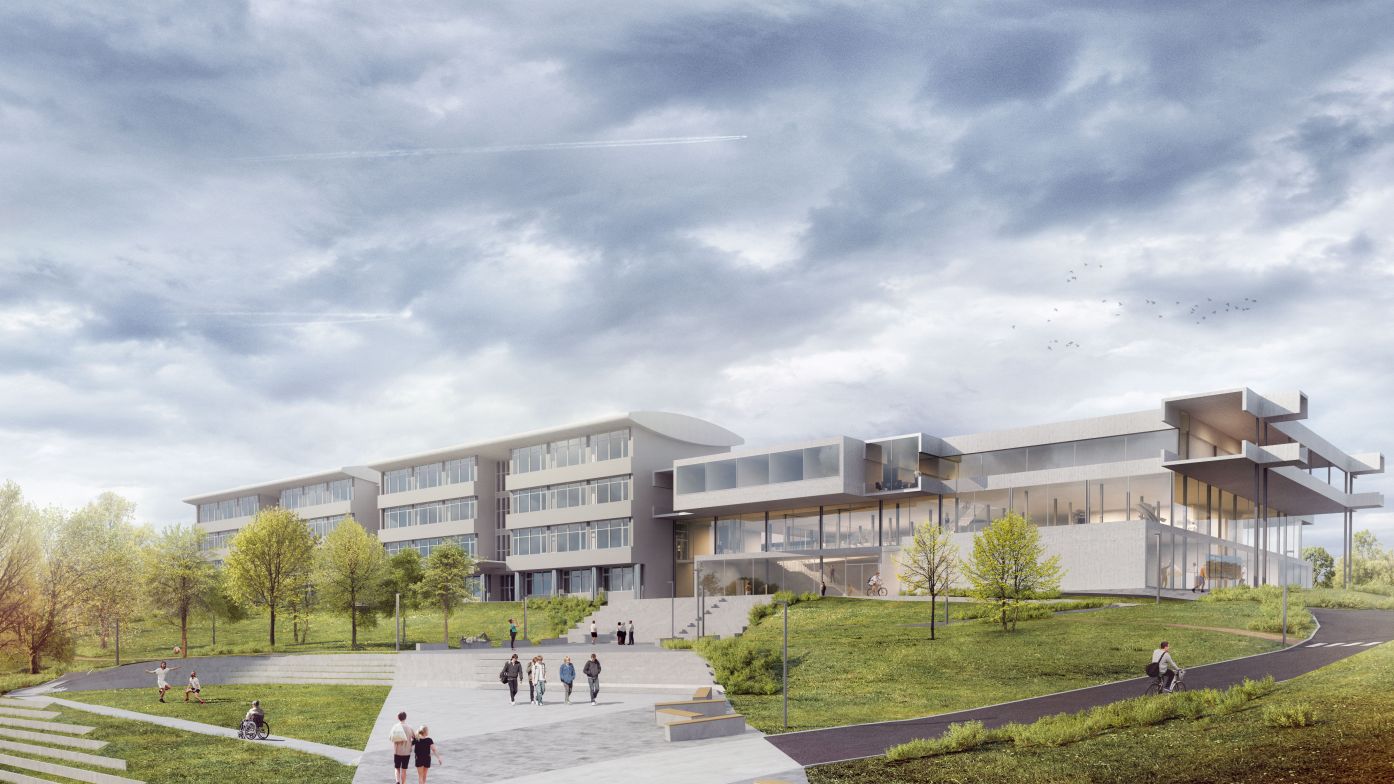 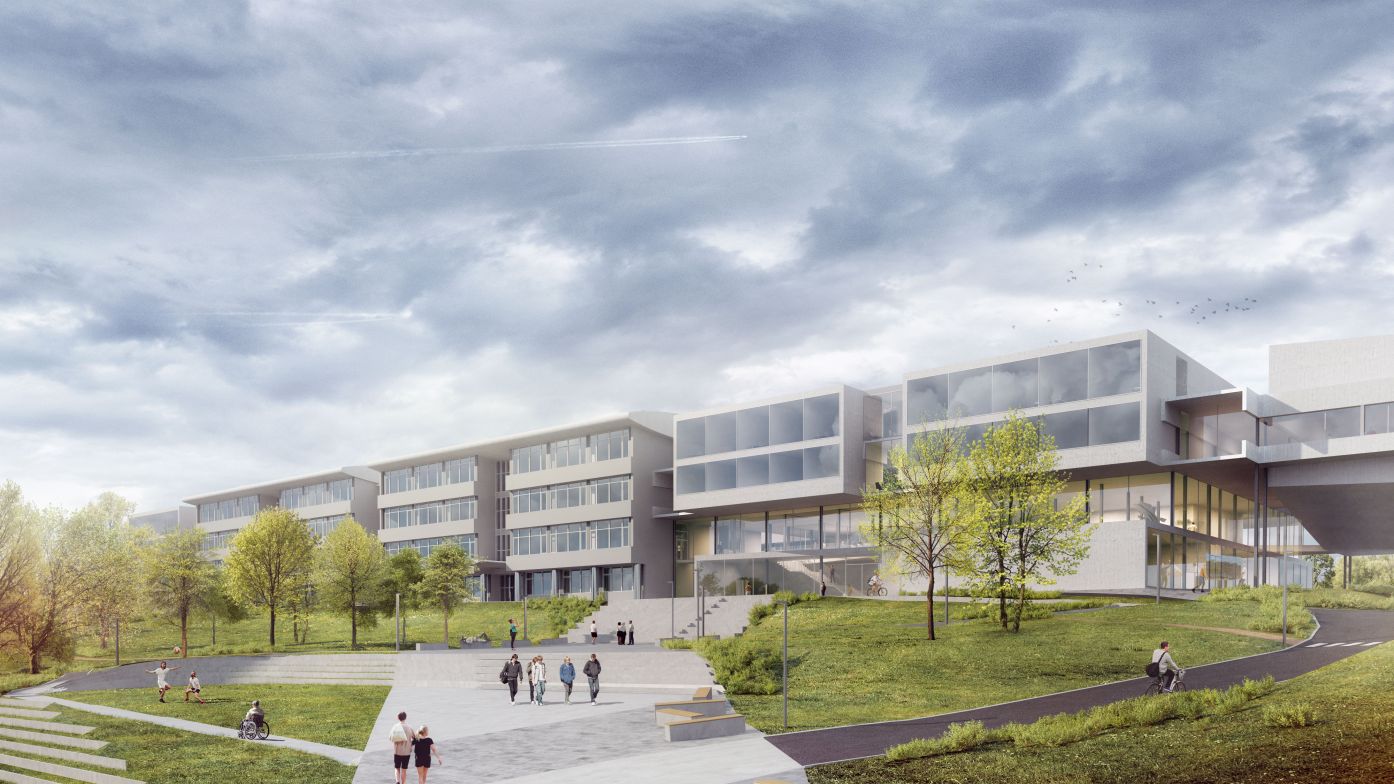 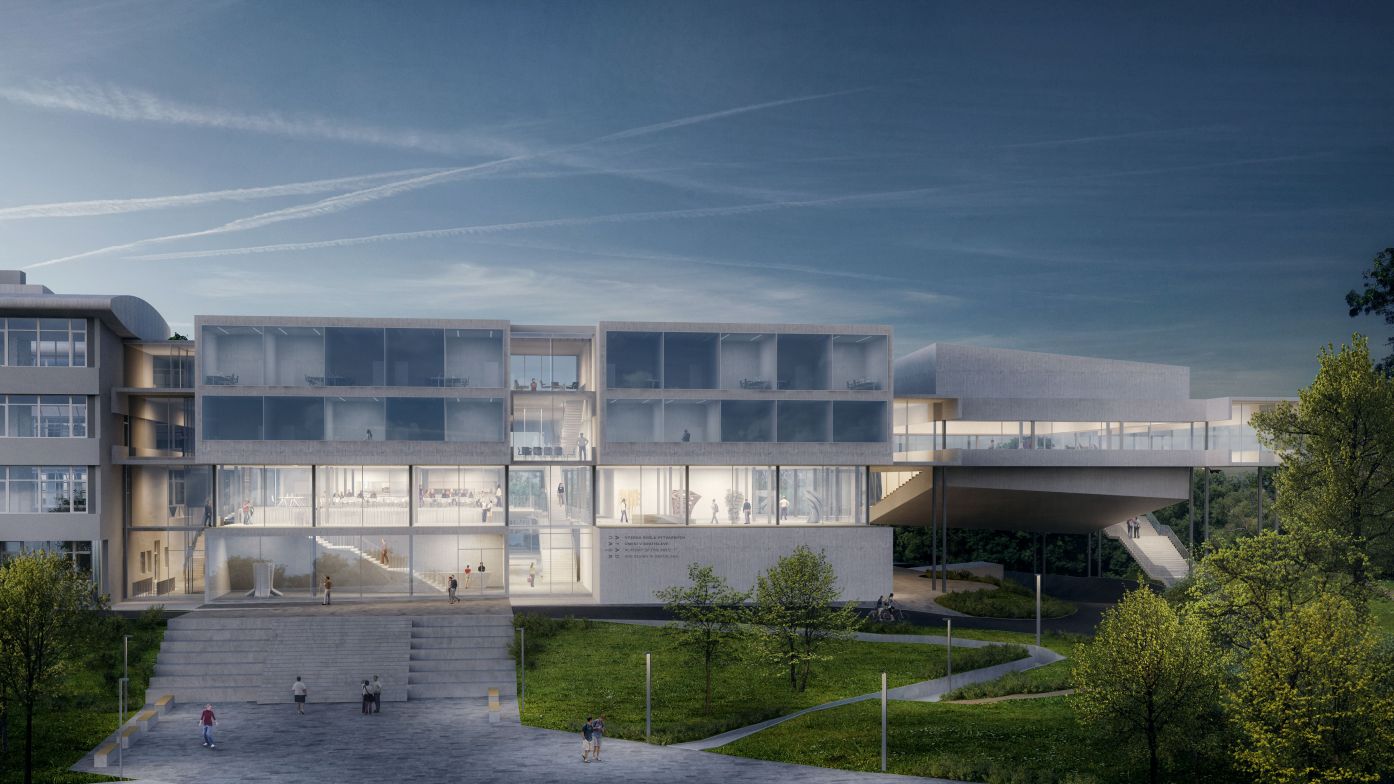 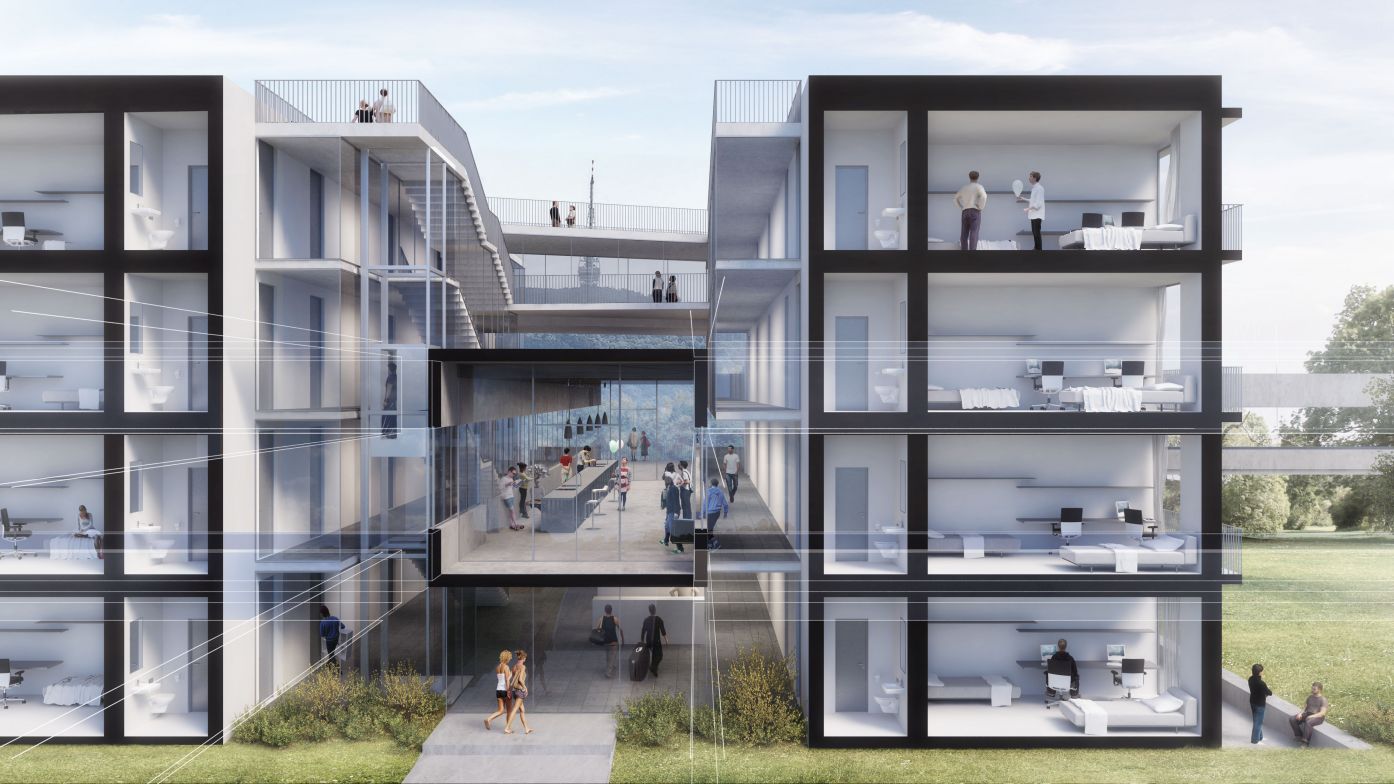 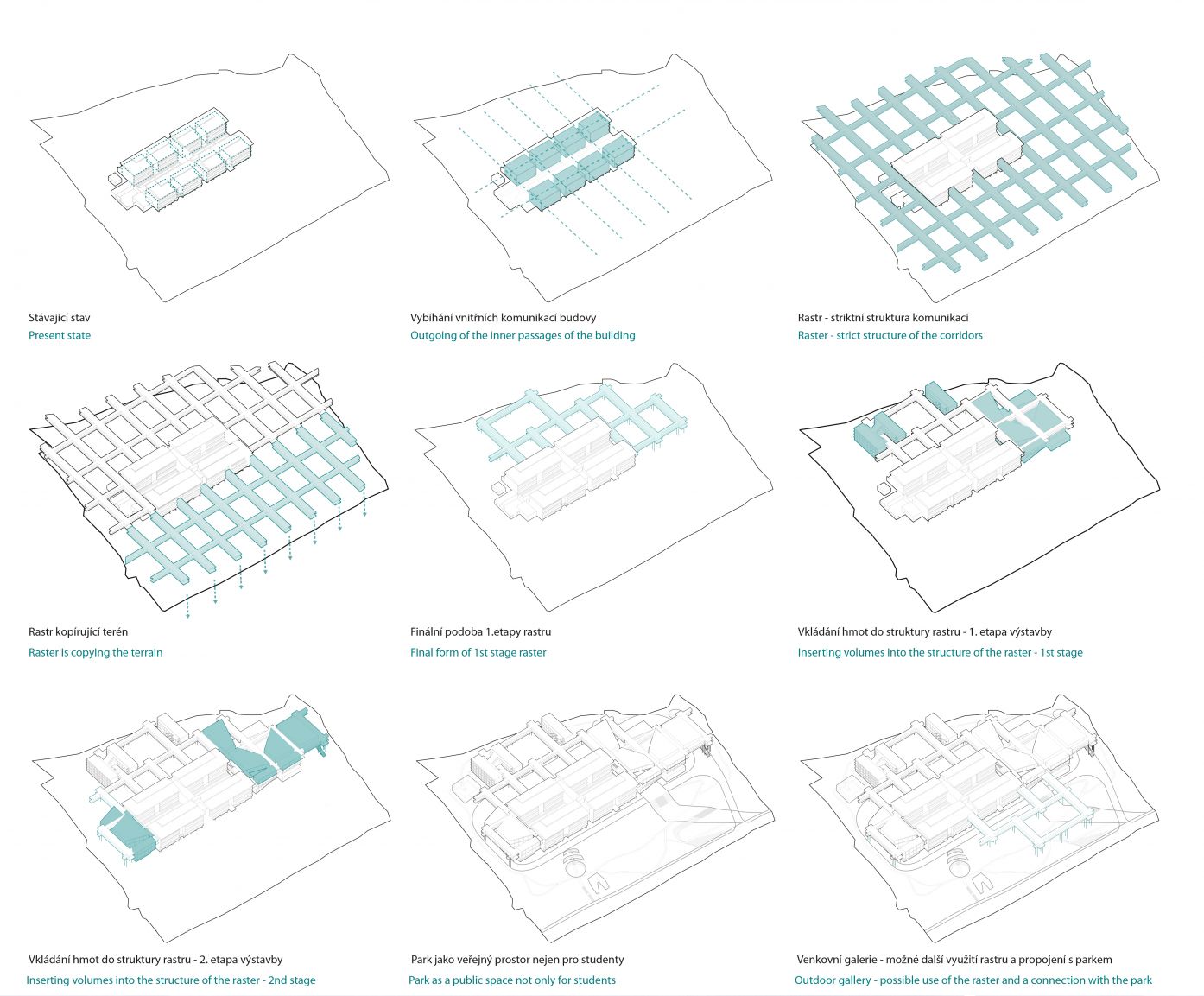 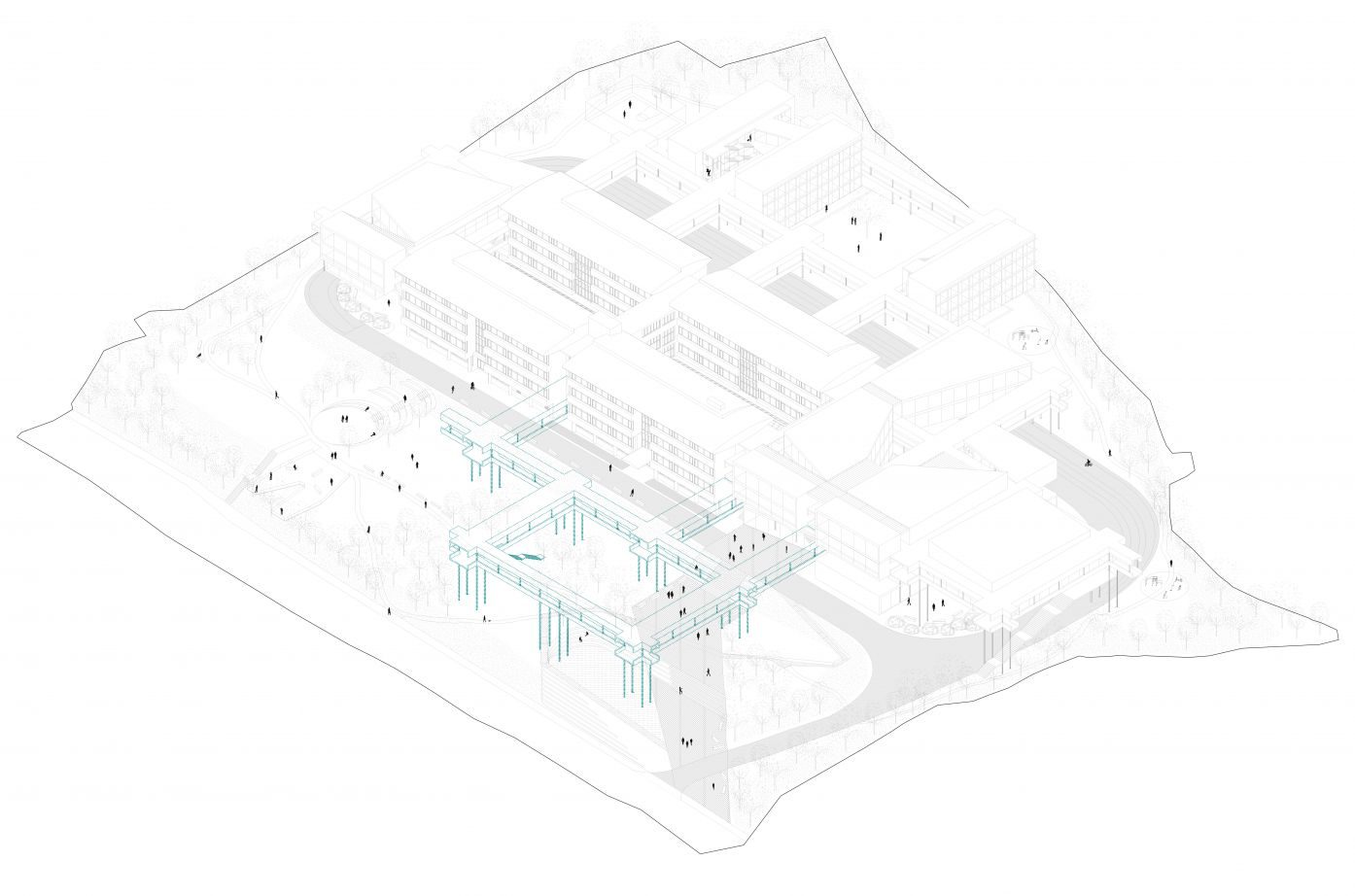 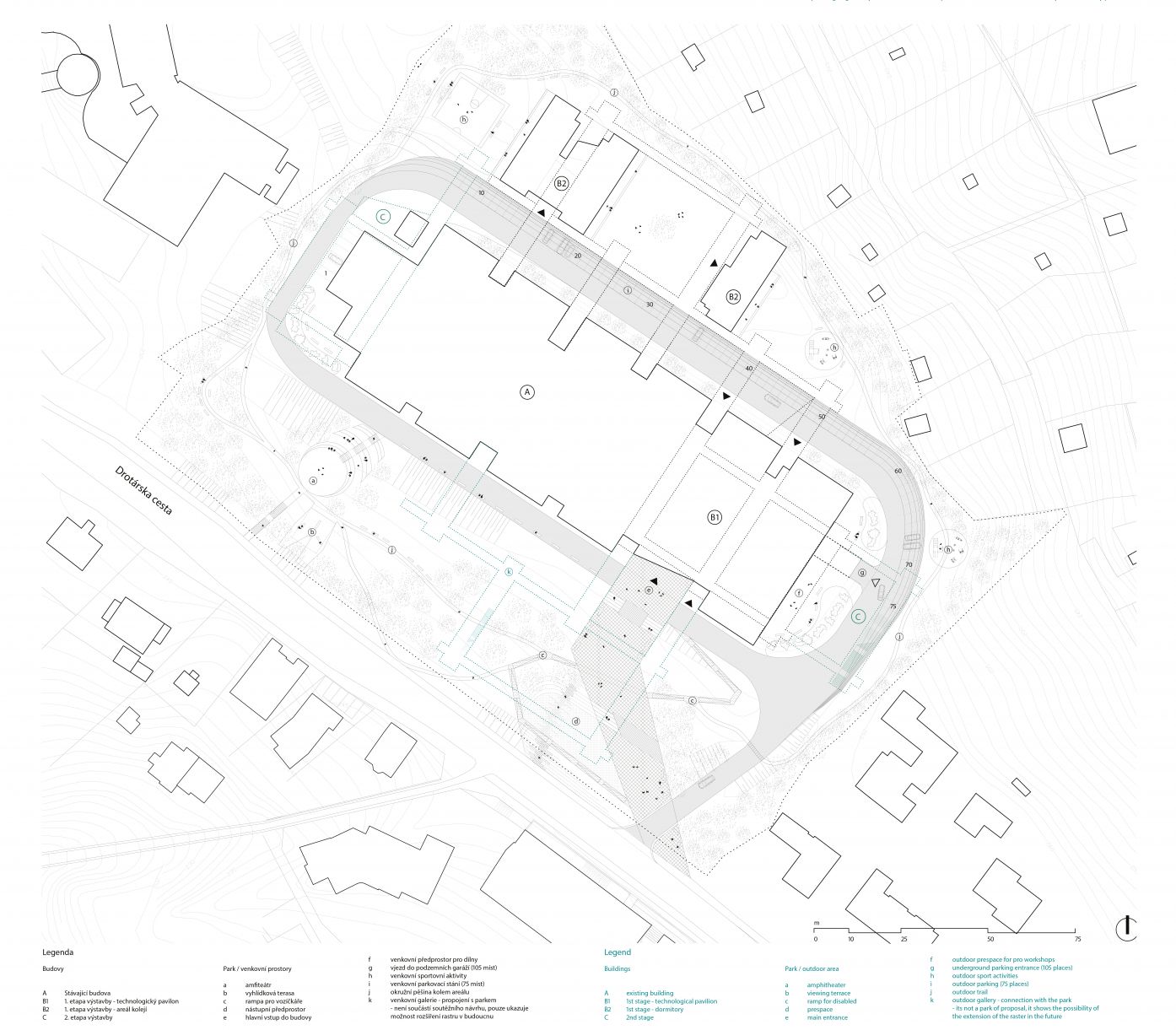