Prague is one of the most important and at the same time one of the most beautiful cities in Europe. However, it is only now beginning to open itself up more to a new perception of the city. It needs improvements of its public spaces – the main traffic artery, Wenceslas Square, Charles Square, as well as new, quality and architecturally distinctive public buildings. Nevertheless, this means not only eccentric buildings, but buildings which play a role in forming and revitalising public life in a 21st century city. A new Congress Centre located on a main transport route through the city can represent the beginning of such a process, without which Prague cannot compete with other large cities on a European and worldwide level.

Our idea is centred around the continuity of the architectural heritage of the second half of the 20th century and its specific qualities – the search for new architectural and civic forms and strong social engagement. These are the qualities that have defined the best Czechoslovak and European architecture.

At the same time we must be critical with regard to the errors of the architecture of that period – the disregard for street life, the public space and for an accommodating approach to people. As a result, in creating a public space we had in mind models of contemporary civic space such as High Line Park in New York, the Oslo Opera House or Superkilen in Copenhagen. We have created a building and a concept of its surroundings, which accommodate the requirements of the city’s inhabitants and form a public space for all. A building which is not merely an inert, hermetically sealed shell for individual functions. A building which does not divide, but integrates. This relates to both the external environment in front of and beneath the
building, and to its internal layout, the vertebral conception of which is an “inside street”, interconnecting all the functions of the existing KCP building and of the annexes currently in the design stage.

OUR PROJECT PRESENTS:
1) A public space that does not divide, but provides an incentive for variable use, which activates civic life.
2) A public building that represents a strong architectural gesture, but does not attempt to be a new dominant feature.
Instead of this it complements the existing dominant feature of the KCP: it adjusts and improves it, but does not attempt to compete with it.
3) An internal layout of the KCP on the basis of an “internal circle” – main communication-spatial vertebra – variably connecting both buildings on a number of levels.
4) A reduction of the communication solution to a single level, which dispenses with the current unsatisfactory bisection of the city by the traffic artery. The newly created urban boulevard will thus interconnect and integrate long-isolated fragments of the city.

From the very beginning of the creation of the concept, it was important for us that the New KCP building and the public space as a whole would function already in the first stage. For this reason we decided to raise the annex above the ground and place it on columns, thereby freeing up an expansive public space in the first stage of the project. In addition to the annex building itself, the area of the PLATFORM shall also be created in the first stage. This links the
current building with the new annex (New KCP) and the city. By the city we mean the park and metro to the north, the traffic artery in the eastern part and the whole of the Pankrác district, which we connect by means of the existing footbridge. In the second stage, after the communication solution has been brought to a single level, the PLATFORM will be extended
in a southerly direction and in this section will become a fragment of the new Pankrác Square. From the western side this square will be bordered by a street with a new block development. In this stage the new boulevard in place of today’s traffic artery and the spaces to the east of it will become an integral component of the public space. 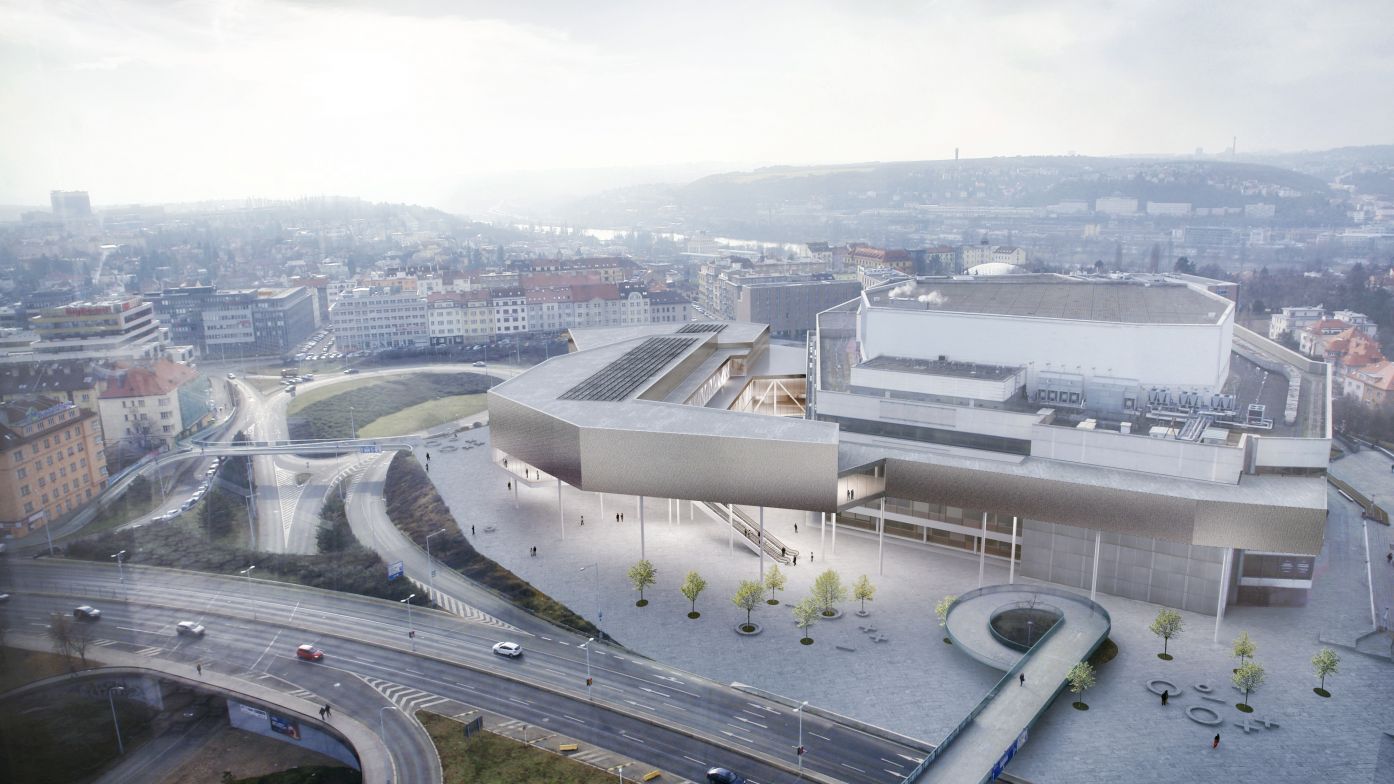 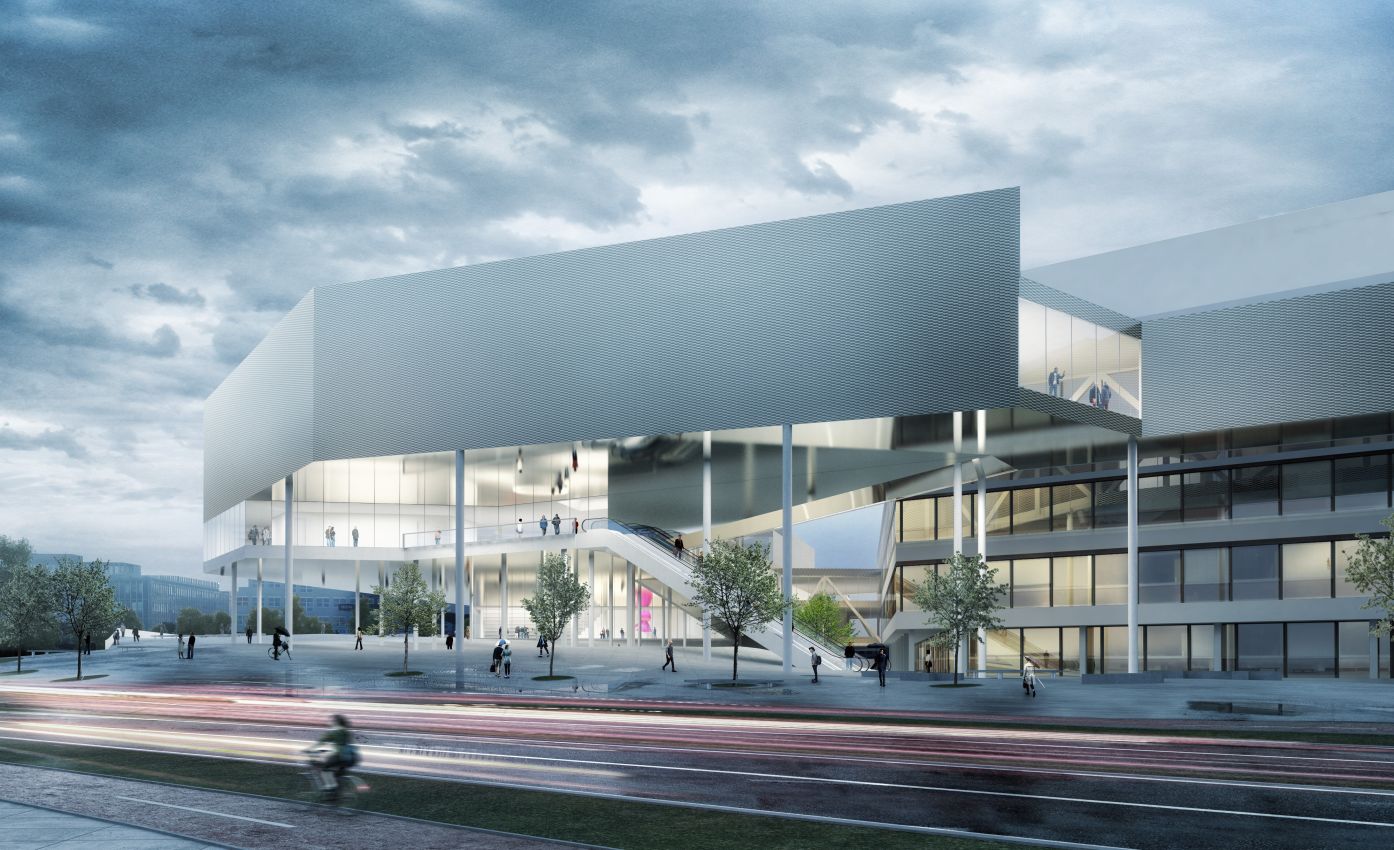 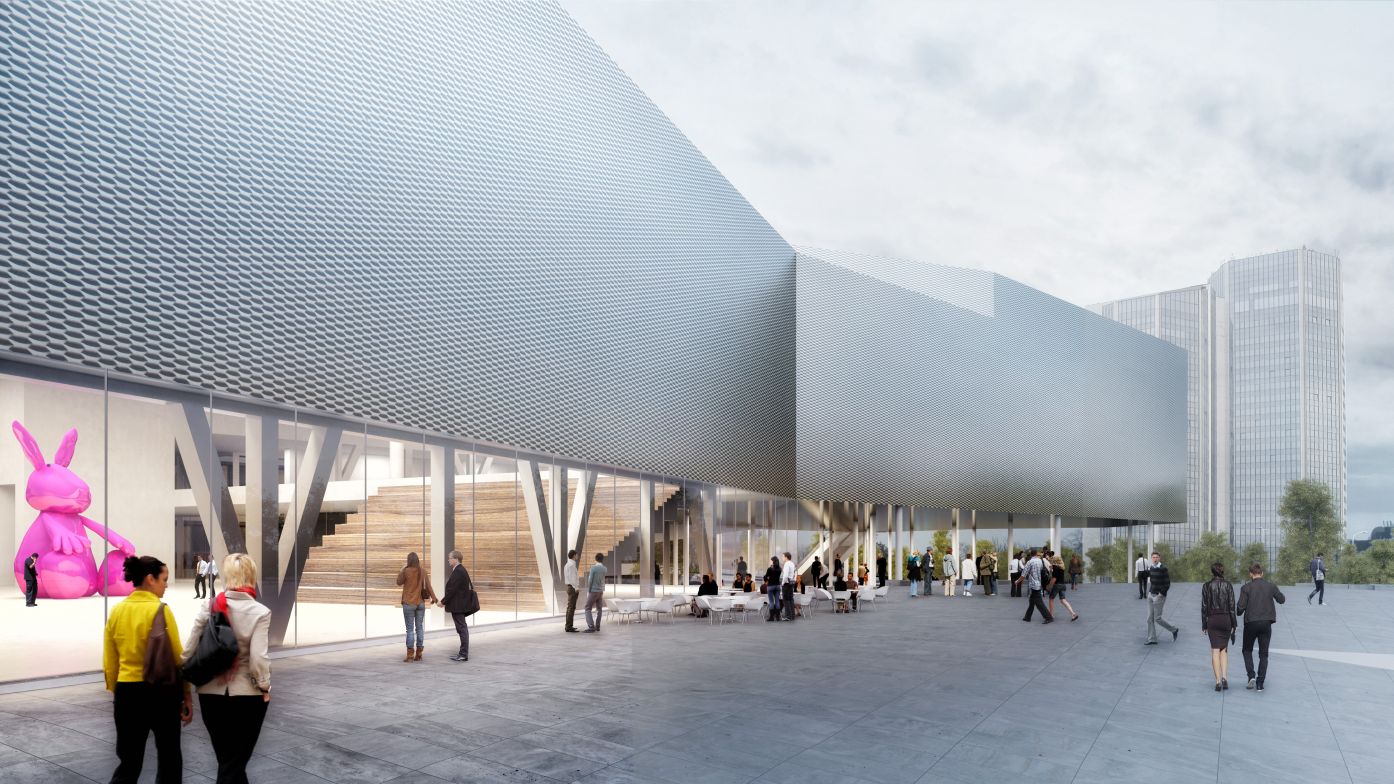 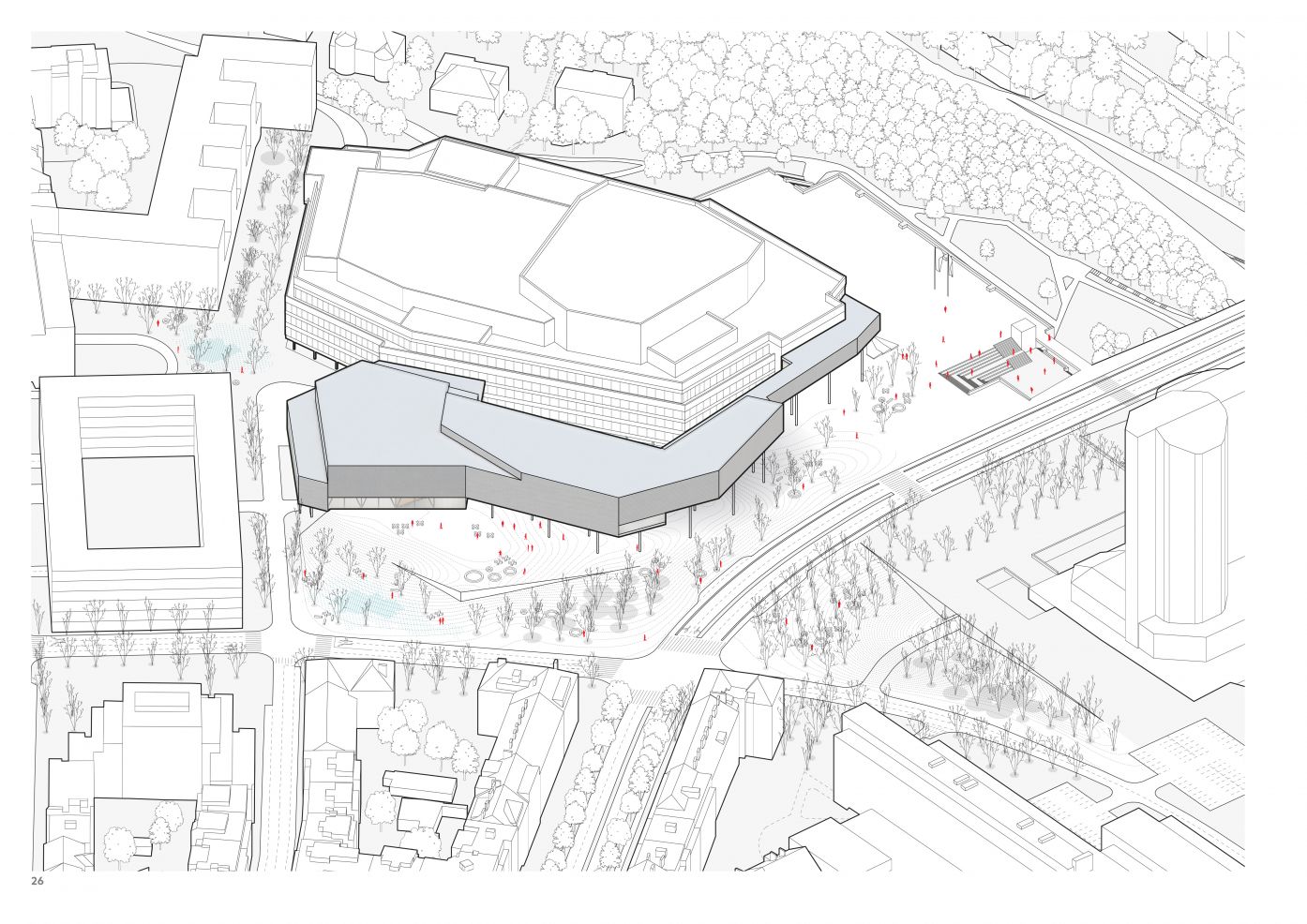 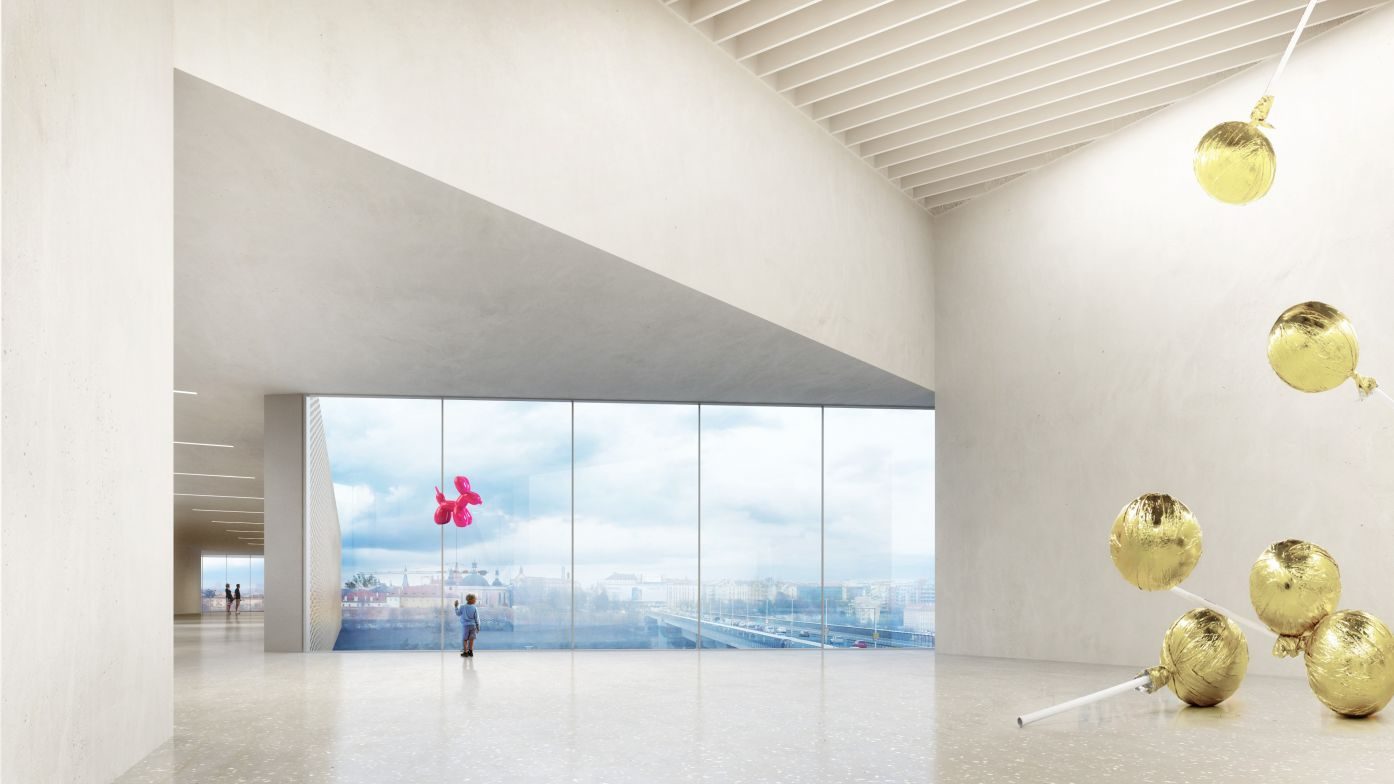 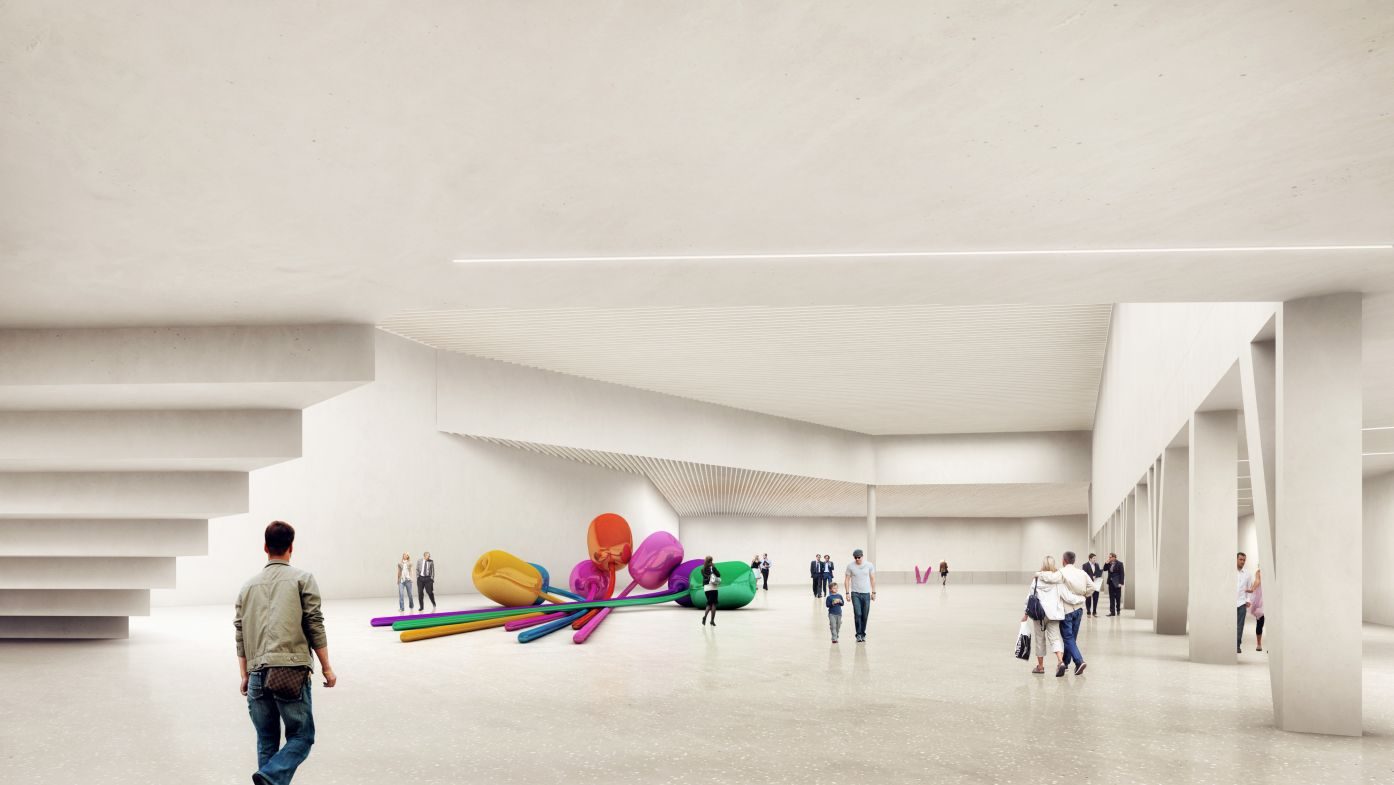 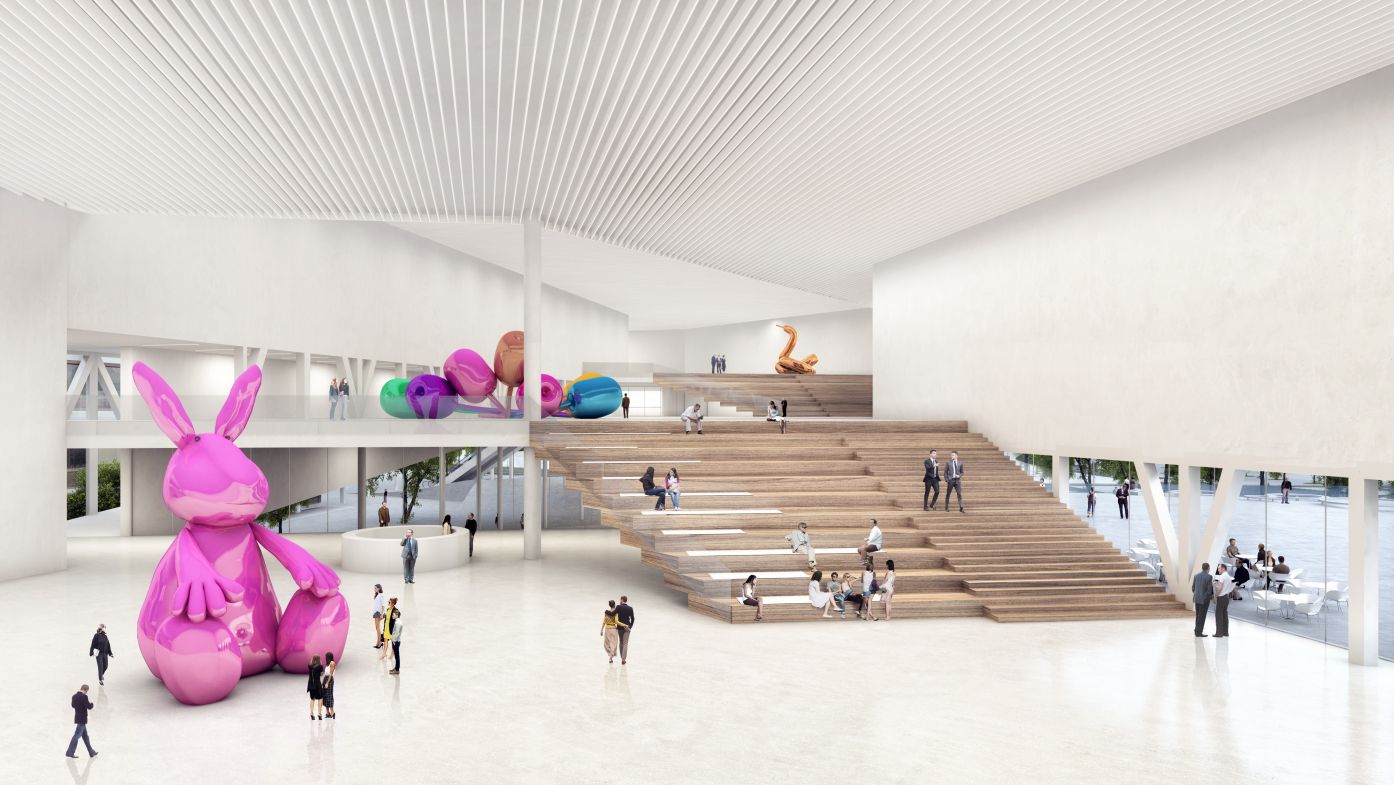 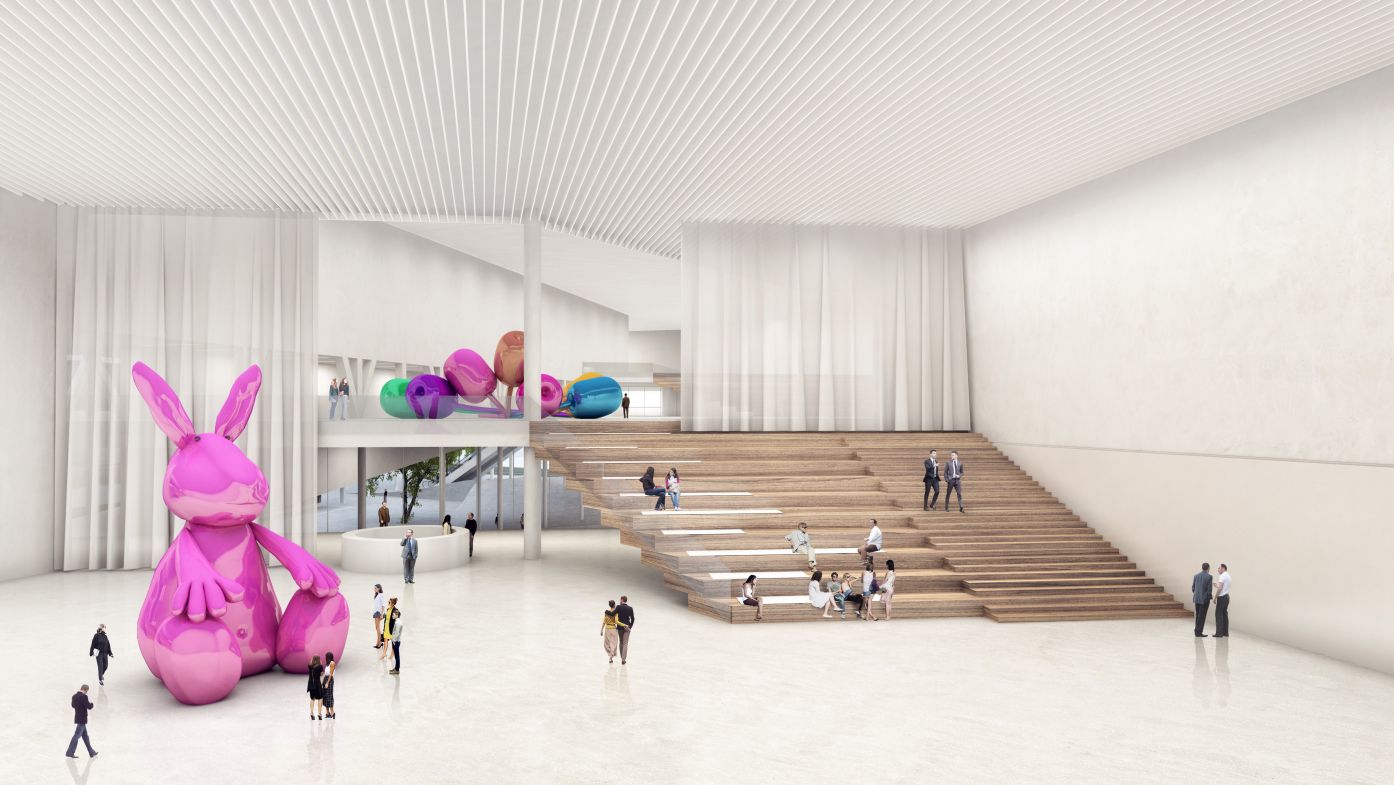 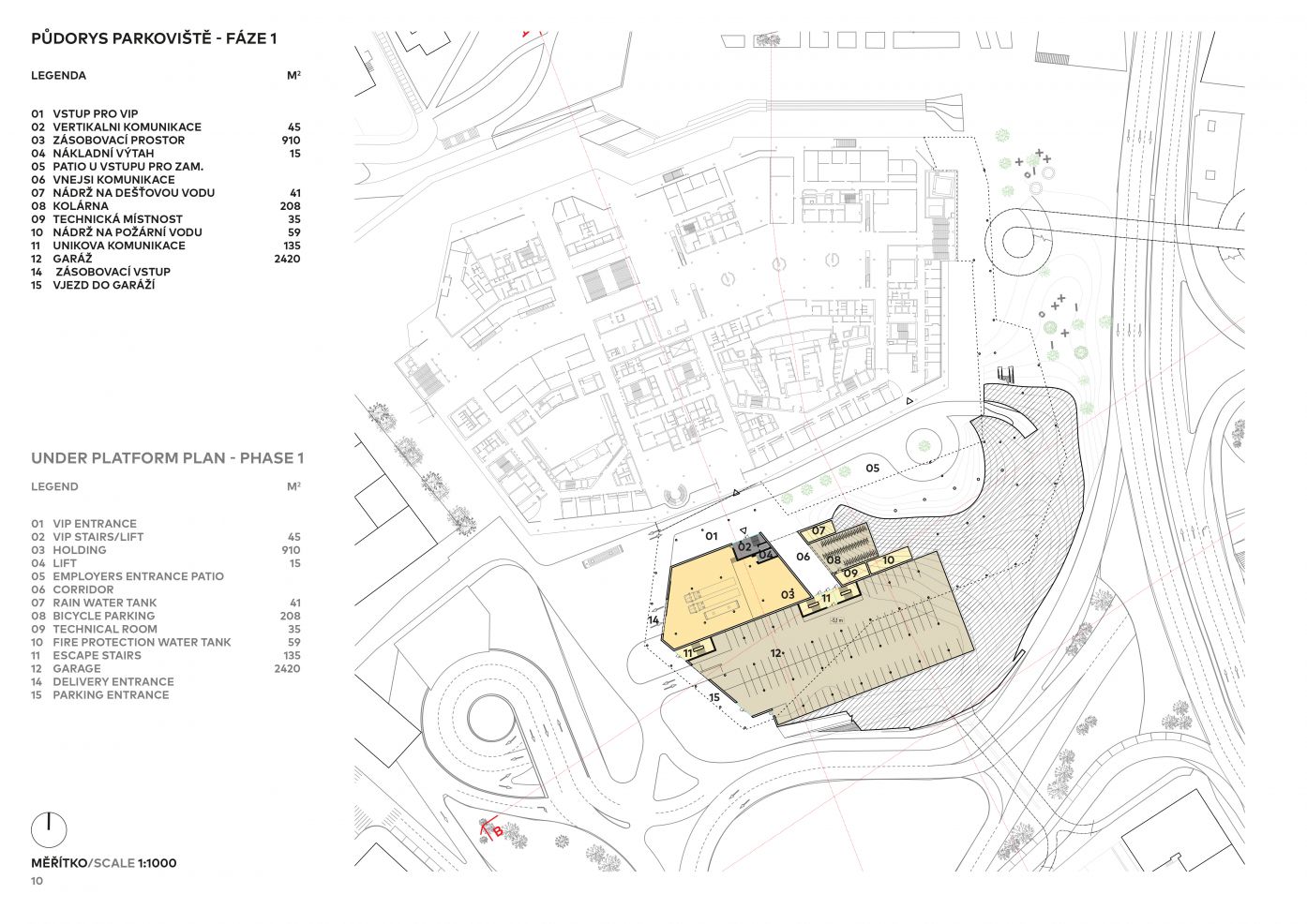 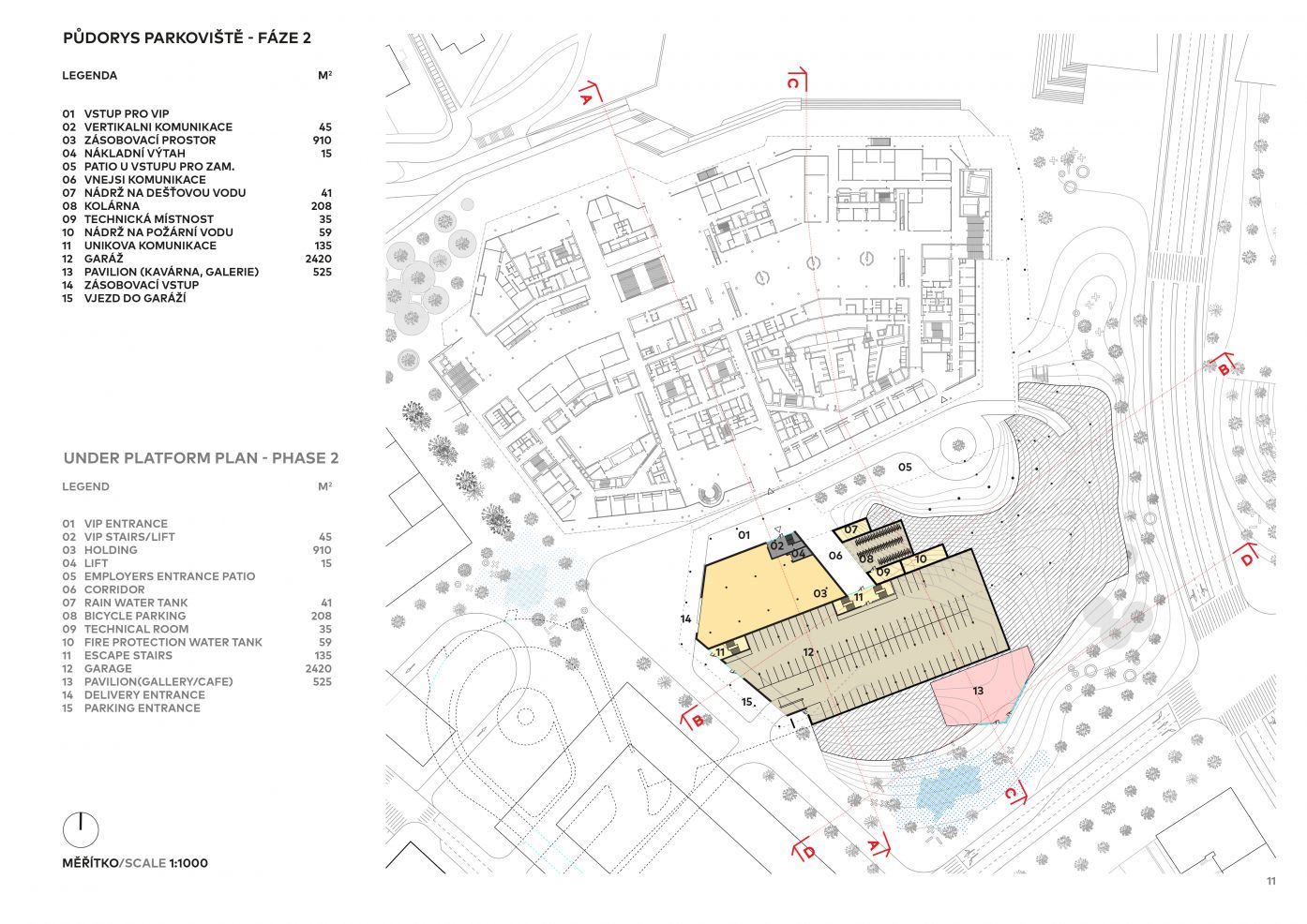 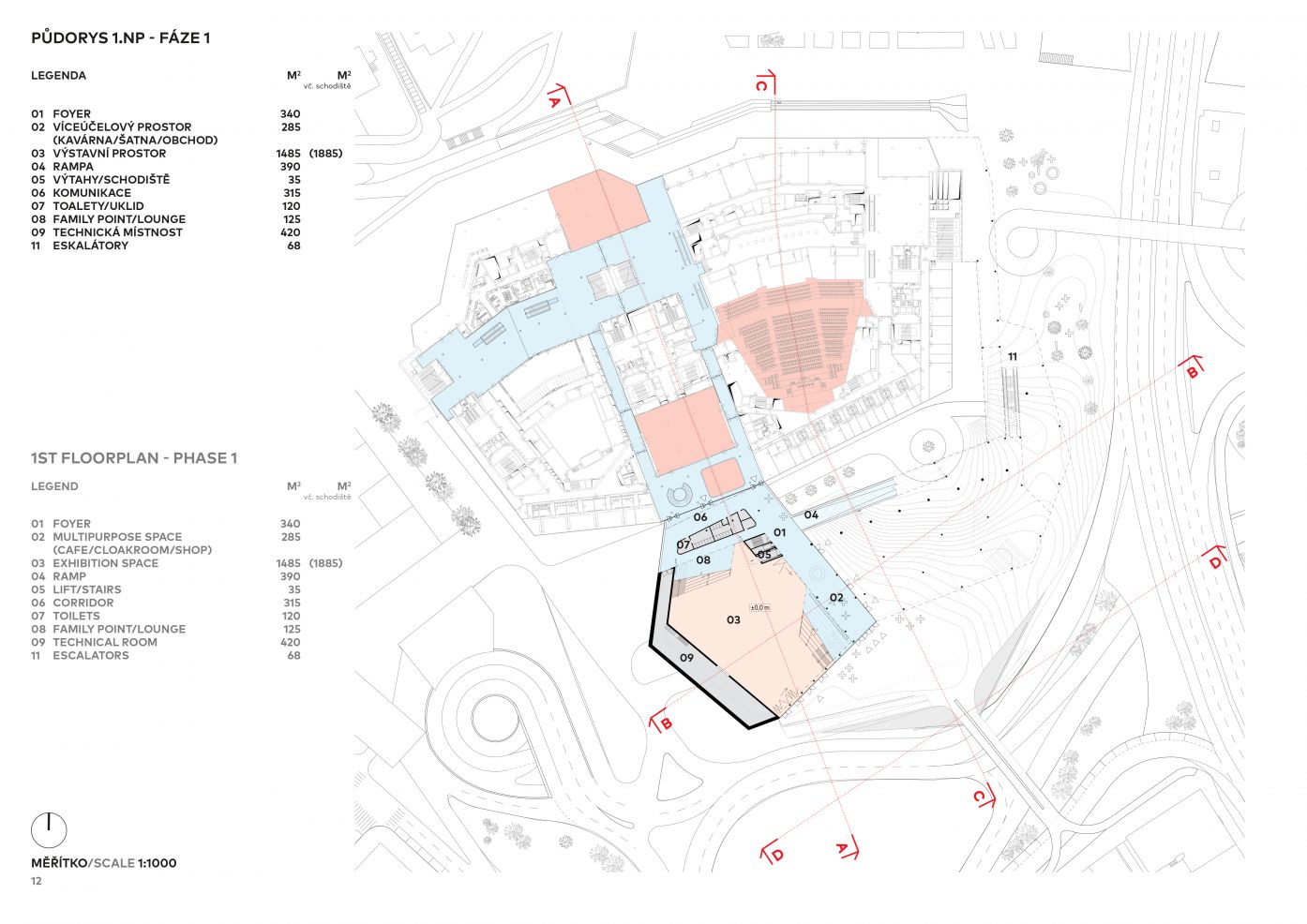 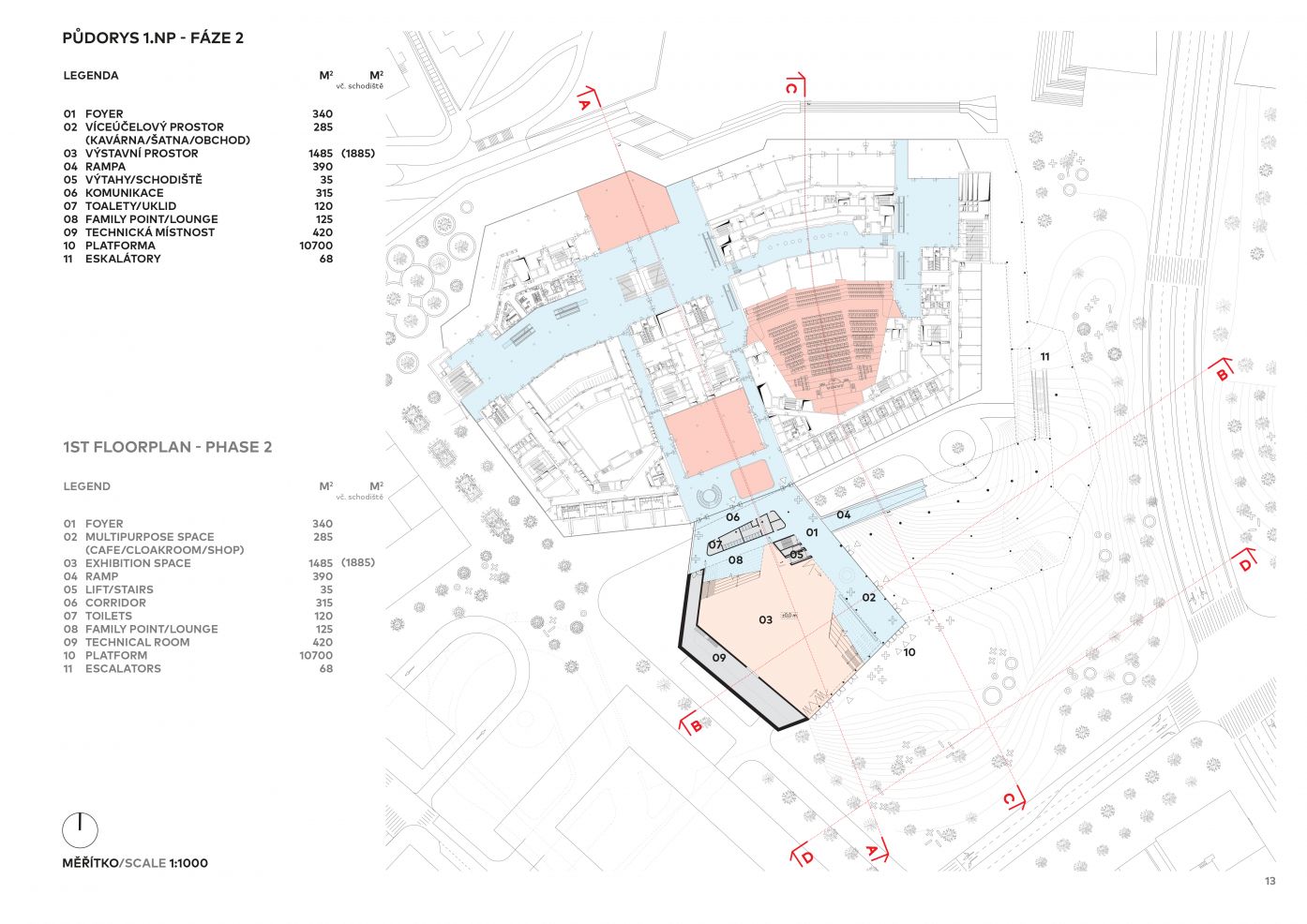 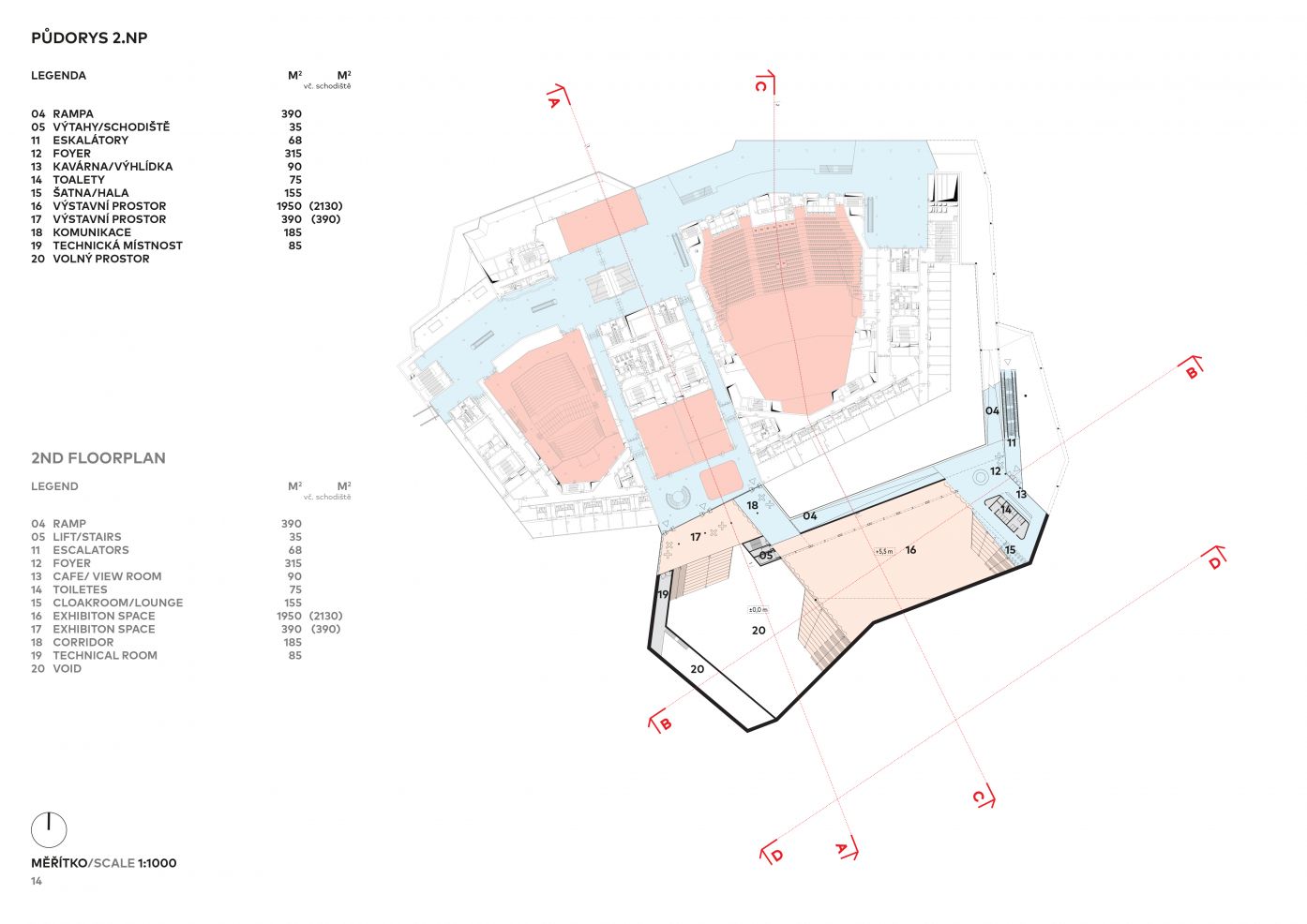 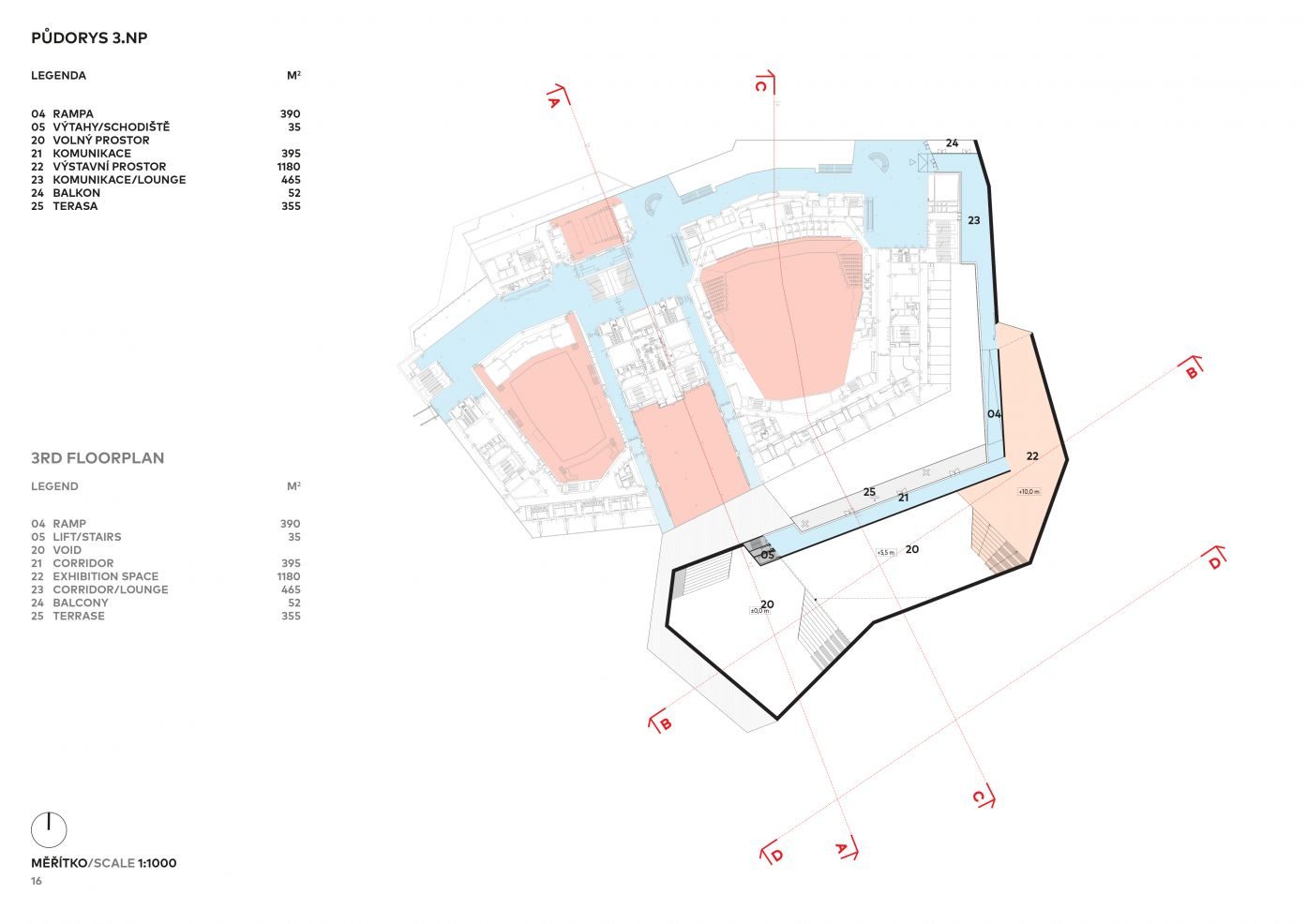 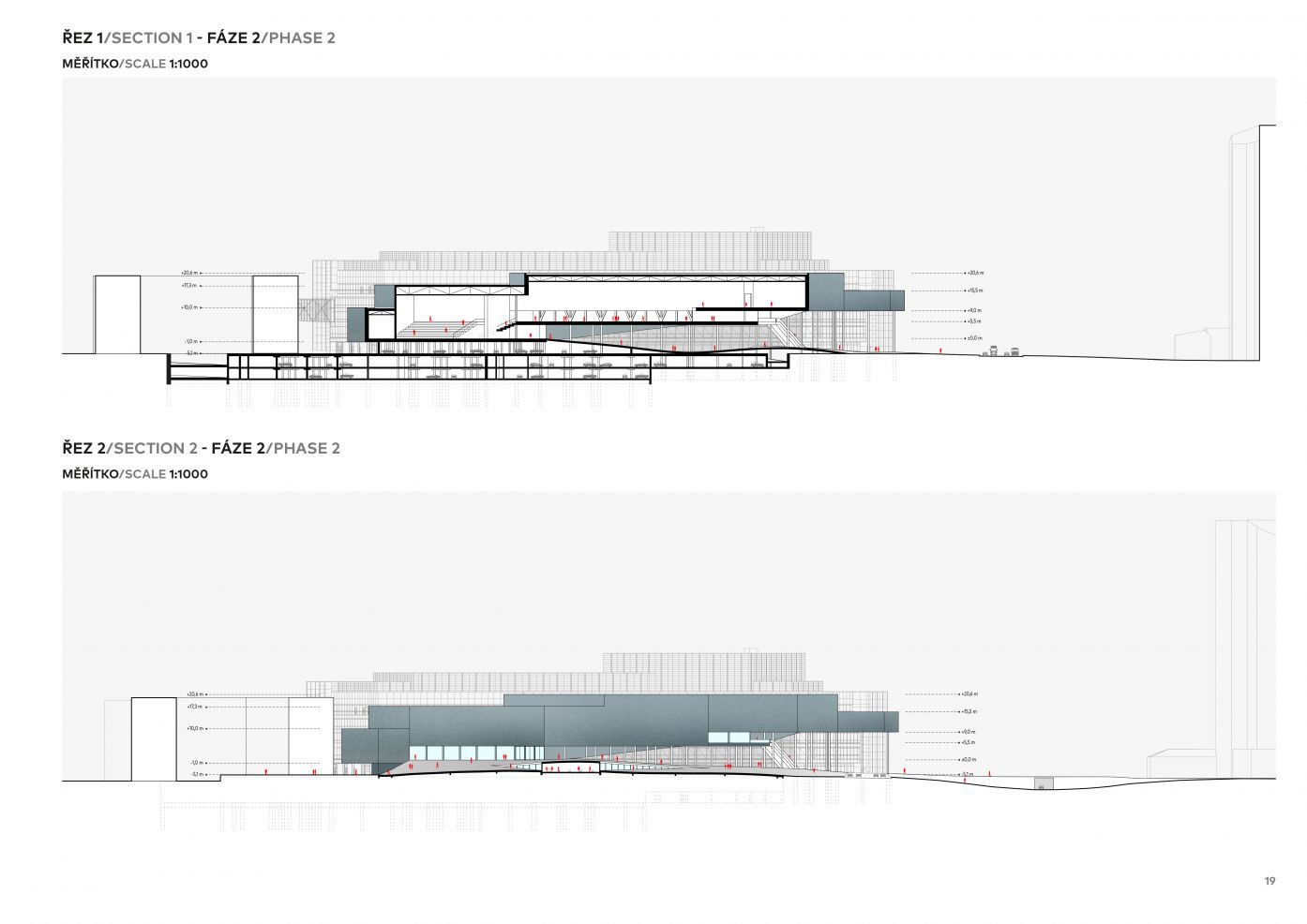